Paolo Rossi (born 23 September 1956) is an Italian former footballer, who played as a forward. In 1982, he led Italy to the 1982 FIFA World Cup title, scoring six goals to win the Golden Boot as top goalscorer, and the Golden Ball for the player of the tournament. Rossi is one of only three players to have won all three awards at a World Cup, along with Garrincha in 1962, and Mario Kempes in 1978. 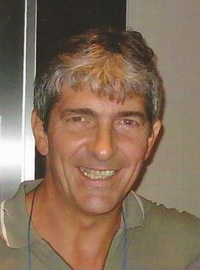 image credit
Paolo Rossi by Christophe95, is licensed under cc-by-sa-3.0, resized from the original.