Pamela Fionna Adlon (née Segall; born July 9, 1966) is an American actress, voice actress, and television producer. She was originally credited as Pamela Segall, but since her marriage and divorce she's been credited as either "Pamela Segall Adlon" or "Pamela S. Adlon". Adlon voiced Pajama Sam in the video games Pajama Sam In: No Need to Hide When It's Dark Outside, Pajama Sam 2: Thunder and Lightning Aren't So Frightening, Pajama Sam 3: You Are What You Eat from Your Head to Your Feet and Pajama Sam's Games to Play on Any Day. 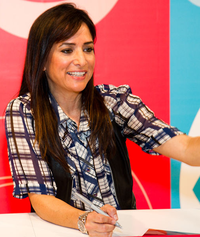 image credit
Pamela Adlon by Pamela_Adlon_at_San_Diego_Comic-Con_2011.jpg, is licensed under cc-by-2.0, resized from the original.