Phabullo Rodrigues da Silva (born November 1, 1994), known professionally as Pabllo Vittar (Portuguese pronunciation: [ˈpablu viˈtaɾ]) is a Brazilian drag queen, singer and songwriter. Vittar appeared on TV for the first time in 2014, on a Brazilian talent singing show, performing "I Have Nothing" by Whitney Houston. She became famous in the media in 2015 with the success of her music video "Open Bar", a Portuguese-language version of Major Lazer's song "Lean On" with original lyrics, produced by Bonde do Rolê and Omulu. 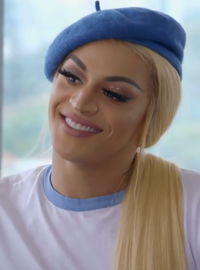 image credit
Pabllo Vittar by Humor Multishow, is licensed under cc-by-3.0, resized from the original.