Omari Latif Hardwick (born January 9, 1974) is an American actor, poet, rapper, producer, and podcaster known for his starring role as James "Ghost" St. Patrick, the protagonist of Starz's Power and his role as Vanderohe in Zack Snyder's Army of the Dead (2021). He is also known for his roles in Saved and Dark Blue, in Spike Lee's Miracle at St. Anna (2008), Kick-Ass (2010), Tyler Perry's For Colored Girls (2010) and as Andre in BET Network's Being Mary Jane. 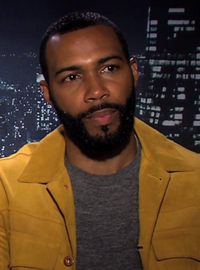 image credit
Omari Hardwick by Behind The Velvet Rope TV, is licensed under cc-by-3.0, resized from the original.