Nigella Lucy Lawson (born 6 January 1960) is an English journalist, broadcaster, television personality, gourmet, and food writer. She is the daughter of Nigel Lawson, the former Chancellor of the Exchequer, and Vanessa (née Salmon) Lawson, whose family owned the J. Lyons and Co. food and catering business. Nigella Bites won Lawson a Guild of Food Writers Award; her 2005 ITV daytime chat show Nigella was met with a negative critical reaction and was cancelled after attracting low ratings. She hosted the Food Network's Nigella Feasts in the United States in 2006, followed by a three-part BBC Two series, Nigella's Christmas Kitchen, in the UK, which led to the commissioning of Nigella Express on BBC Two in 2007. 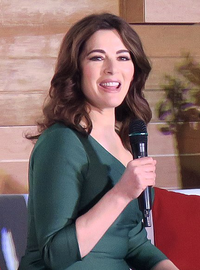 image credit
Nigella Lawson by Cecile van Straten, is licensed under cc-by-sa-2.0, resized from the original.