Nicole Scherzinger (/niˈkoʊl ˈʃɜrzɪŋər/ ni-KOHL SHUR-zing-ər, born Nicole Prescovia Elikolani Valiente; June 29, 1978) is an American recording artist, actress and television personality. Following her departure from Eden's Crush, she auditioned for the burlesque inspired recording group, The Pussycat Dolls and she subsequently signed a contract with Interscope Records. The group's debut album, PCD (2005) and its follow-up Doll Domination (2008) both set records for girl groups. Outside of her work in the entertainment industry, Scherzinger is involved in charitable activities through human rights, world issues, and her work as an ambassador for the Special Olympics. 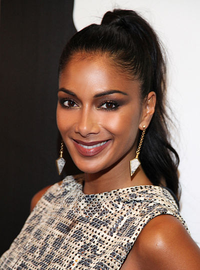 image credit
Nicole Scherzinger by Glenn Francis, is licensed under cc-by-sa-3.0, resized from the original.