Nicolas Kim Coppola (born January 7, 1964), known professionally as Nicolas Cage, is an American actor, director, and producer. He has performed in leading roles in a variety of films, ranging from romantic comedies and dramas to science fiction and action films. Cage is known for his prolificacy, appearing in at least one film per year nearly every year since 1980, with the exception of 1985 and 1991. Most recently, he starred in The Croods, The Frozen Ground, and Joe, which all received acclaim. 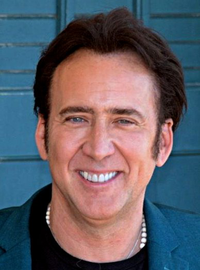 image credit
Nicolas Cage by Georges Biard, is licensed under cc-by-sa-3.0, resized from the original.