Nicholas Edward "Nick" Cave (born 22 September 1957) is an Australian musician, songwriter, author, screenwriter, composer and occasional film actor.He is best known for his work as a frontman of the critically acclaimed rock band Nick Cave and the Bad Seeds, established in 1983, a group known for its eclectic influences and musical styles. Before that, he fronted the group The Birthday Party in the early 1980s, a band renowned for its highly gothic, challenging lyrics and violent sound influenced by post-punk, blues and free jazz. 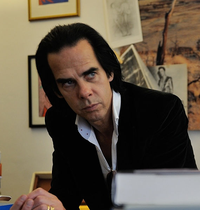