Neill Blomkamp (born 17 September 1979) is a South African-Canadian film and advertisement director, writer, producer and animator. Blomkamp employs a documentary-style, hand-held, cinéma vérité technique, blending naturalistic and photo-realistic computer-generated effects. He is best known as the co-writer and director of critically acclaimed District 9 and the science fiction film Elysium and his frequent collaborations with actor Sharlto Copley. He is based out of Vancouver, British Columbia.Time named Blomkamp as one of the 100 Most Influential People of 2009.Forbes magazine named him as the 21st most powerful celebrity from Africa. 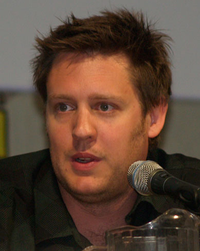 image credit
Neill Blomkamp by https://www.flickr.com/photos/sdnatasha/, is licensed under cc-by-2.0, resized from the original.