Shahid Khan (Urdu: شاهد خان‎; born 1 January 1985), better known by his stage name Naughty Boy, is a British DJ, record producer, songwriter and musician. In 2012, Shahid Khan signed a three–year publishing deal with Sony ATV, as well as a recording contract to release one album under Virgin EMI Records. Shahid Khan launched himself as a record producer under the moniker "Naughty Boy" and runs his own production company called Naughty Boy Recordings. 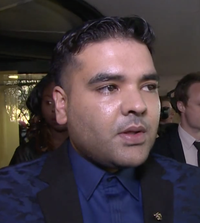 image credit
Naughty Boy by The Asian Awards, is licensed under cc-by-3.0, resized from the original.