Ntsikayesizwe David Junior Ngcobo (born 11 February 1997), known professionally as Nasty C, is a South African rapper, singer, songwriter, and record producer . After releasing three mixtapes , one being "Undisputed" and two EP, Ngcobo released his debut album Bad Hair (2016), and Strings and Bling (2018) which was associated and supported by his first tour, The Ivyson Tour. He was the youngest recipient of an award at the 2015 South African Hip Hop Awards, namely the Best Freshman Award. In March 2020, Nasty C signed a joint venture deal with Def Jam Records and released his third album on 28 August 2020 and his first on the label titled Zulu Man With Some Power. 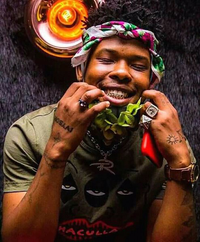 image credit
Nasty C by Owami Mjobo II, is licensed under cc-by-sa-4.0, resized from the original.