For other people with the name Nasri, see NasriNasri Tony Atweh (born January 10, 1981), also known as Nasri, is a Canadian singer, songwriter, and music producer of Arab Palestinian descent, now based in Los Angeles. He was a solo singer with a number of singles before becoming the lead singer of the reggae fusion band Magic! (a band he created with Mark Pellizzer, Alex Tanas, and Ben Spivak in 2012). Magic!'s single "Rude" became a major international hit for the band. Nasri Atweh is also a renowned songwriter and producer, one half of the songwriting / production duo The Messengers. He and Adam Messinger have a string of hits for well-known artists. 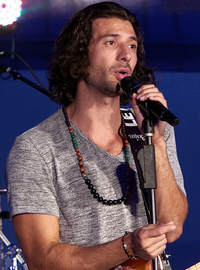 image credit
Nasri (musician) by Justin Higuchi, is licensed under cc-by-2.0, resized from the original.