Horace Bernard Walls III (born December 30, 2001), better known by his stage name Nardo Wick, is an American rapper from Jacksonville, Florida. Signed to Flawless Entertainment and RCA Records, he is best known for his 2021 single "Who Want Smoke?", which has a remix which features fellow rappers G Herbo, Lil Durk, and 21 Savage that propelled it to debut at number 17 on the US Billboard Hot 100 and earn platinum certification by the RIAA. Wick released his debut studio album, Who Is Nardo Wick?, that same year. 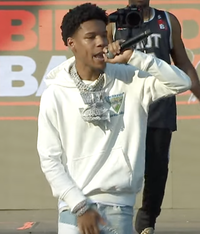 image credit
Nardo Wick by HOTSPOTATL, is licensed under cc-by-3.0, resized from the original.