Nana Mouskouri (Greek: Nάνα Μούσχουρη, pronounced [ˈnana ˈmusxuɾi]), born Iōánna Moúschouri (Greek: Ιωάννα Μούσχουρη, [ioˈana ˈmusxuɾi]) on October 13, 1934, in Chania, Crete, Greece, is a Greek singer. She was known as "Nána" to her friends and family as a child. (In Greek her surname is pronounced with the stress on the first syllable – MOOS-hoo-ree – rather than the second.)She has recorded songs in many languages, including Greek, French, English, German, Dutch, Italian, Portuguese, Spanish, Hebrew, Welsh, Mandarin Chinese, Corsican, and Turkish. 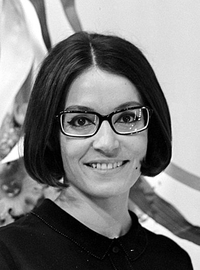 image credit
Nana Mouskouri by Kroon, Ron / Anefo, is licensed under cc-by-sa-3.0, resized from the original.