Rosa Isabel Mutya Buena (born 21 May 1985) is an English recording artist who rose to fame as a member of girl group the Sugababes. With the Sugababes, Buena had four UK number one singles, an additional six top-ten hits and three multi-platinum albums. After leaving the group in December 2005, she released her debut solo album, Real Girl in June 2007. In October 2010, Buena released a compilation album dedicated to British singers, titled Sound of Camden: Mutya Buena. On 20 July 2012, Buena and her former Sugababes bandmates Donaghy and Buchanan confirmed their reunion. The original trio will not be able to release music under the name Sugababes as it is still being used by the current members of the band. They will instead release music under the new band name MKS (Mutya Keisha Siobhan). 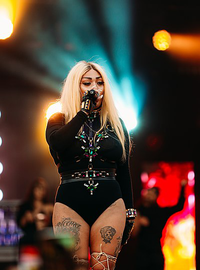 image credit
Mutya Buena by Richard Broekhuijzen, is licensed under cc-by-sa-4.0, resized from the original.