Monica Potter (born Monica Gregg Brokaw; June 30, 1971) is an American actress, best known for her roles in films Con Air (1997), Patch Adams (1998), Along Came a Spider (2001), and Saw (2004). She appears as Kristina Braverman in the NBC drama series Parenthood, for which she was nominated for a Golden Globe Award. 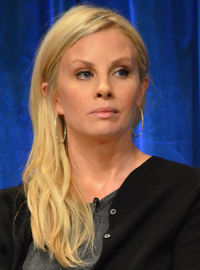 image credit
Monica Potter by Genevieve, is licensed under cc-by-2.0, resized from the original.