Gouranga Chakraborty, better known by his stage name Mithun Chakraborty, is an Indian film actor, singer, producer, writer, social worker, entrepreneur and the Rajya Sabha Member of Parliament. He is the recipient of three National Film Awards. He made his acting debut with the art house drama Mrigayaa (1976), for which he won his first National Film Award for Best Actor. A comic book named Jimmy Zhingchak has been made based on Chakraborty. 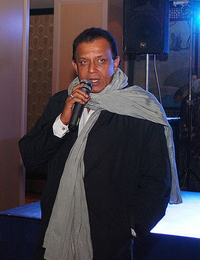