Michael Geoffrey Skinner (born 27 November 1979) is an English rapper, singer-songwriter, musician, and record producer. Best known for the music project The Streets, Skinner has also released music as a solo artist, as part of The D.O.T with frequent collaborator Rob Harvey, and under the pseudonym The Darker the Shadow the Brighter the Light. 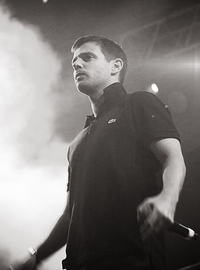 image credit
Mike Skinner (musician) by Karatyshov, is licensed under cc-by-sa-3.0, resized from the original.