Michael Dale "Mike" Huckabee (born August 24, 1955) is an American politician who served as the 44th Governor of Arkansas (1996–2007). He was a candidate in the 2008 United States Republican presidential primaries, winning the 2008 Iowa Republican caucuses and finishing second in delegate count and third in both popular vote and number of states won (behind both John McCain and Mitt Romney).Huckabee currently hosts the eponymous Fox News Channel talk show Huckabee. From April 2012 through December 2013, he hosted a daily radio program, The Mike Huckabee Show, on weekday afternoons for Cumulus Media Networks.Huckabee is the author of several best selling books, an ordained Southern Baptist minister, musician and a public speaker. He is also an ABC Radio political commentator. 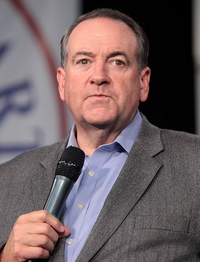 image credit
Mike Huckabee by Gage Skidmore, is licensed under cc-by-sa-3.0, resized from the original.