Michaela Ewuraba Boakye-Collinson (born 1987), known professionally as Michaela Coel, is a British actress, screenwriter, director, producer and singer. She is best known for creating and starring in the E4 sitcom Chewing Gum (2015–2017), for which she won the BAFTA Award for Best Female Comedy Performance; and the BBC One/HBO comedy-drama series I May Destroy You (2020) for which she won the British Academy Television Award for Best Actress in 2021. For her work on the latter, Coel made history as the first Black woman to win the Emmy Award for Outstanding Writing for a Limited Series, Movie, or Dramatic Special at the 73rd Primetime Emmy Awards. 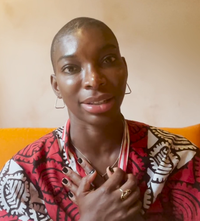 image credit
Michaela Coel by Peabody Awards, is licensed under cc-by-sa-3.0, resized from the original.