Michael Owen Rosenbaum (born July 11, 1972) is an American film and TV actor, director, producer and writer. He is best known for his performance in Sorority Boys and for portraying Lex Luthor on the Superman television series Smallville, a role that TV Guide included in their 2013 list of The 60 Nastiest Villains of All Time.Rosenbaum is also known for portraying Dutch Nilbog on FOX's Breaking In, and voiceover work in animation, such as his role of the Flash in the DC animated universe. 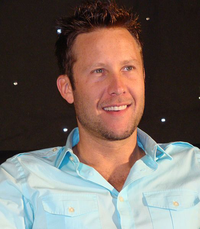 image credit
Michael Rosenbaum by vagueonthehow, is licensed under cc-by-2.0, resized from the original.