Michael J. Fox, OC (born Michael Andrew Fox; June 9, 1961) is a Canadian–American actor, author, comedian, producer, advocate and voice-over artist. With a film and television career spanning from the 1970s, Fox's roles have included Marty McFly from the Back to the Future trilogy (1985–1990); Alex P. He was appointed an Officer of the Order of Canada in 2010. 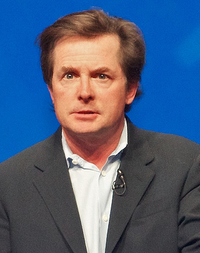 image credit
Michael J. Fox by Paul Hudson, is licensed under cc-by-2.0, resized from the original.