Michael Chabon (/ˈʃeɪbɒn/ SHAY-bon;born May 24, 1963) is an American author and "one of the most celebrated writers of his generation," according to The Virginia Quarterly Review.Chabon's first novel, The Mysteries of Pittsburgh (1988), was published when he was 25 and catapulted him to literary celebrity. He followed it with a second novel, Wonder Boys (1995), and two short-story collections. Since the late 1990s, Chabon has written in an increasingly diverse series of styles for varied outlets; he is a notable defender of the merits of genre fiction and plot-driven fiction, and, along with novels, he has published screenplays, children's books, comics, and newspaper serials. 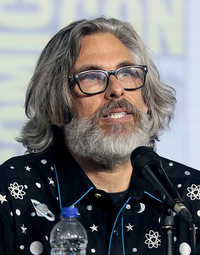 image credit
Michael Chabon by Gage Skidmore, is licensed under cc-by-sa-3.0, resized from the original.