Sir Michael Caine, CBE (born Maurice Joseph Micklewhite; 14 March 1933) is an English actor and author. Renowned for his distinctive Cockney accent, Caine has appeared in over 115 films and is one of the UK's most recognisable actors.He made his breakthrough in the 1960s with starring roles in a number of acclaimed British films, including Zulu (1964), The Ipcress File (1965), Alfie (1966), for which he was nominated for an Academy Award, The Italian Job (1969), and Battle of Britain (1969). In 2000, Caine was knighted by Queen Elizabeth II in recognition of his contribution to cinema. 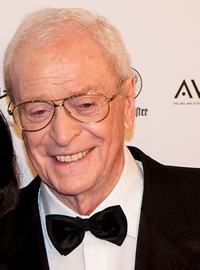 image credit
Michael Caine by TonkBerlin, is licensed under cc-by-sa-4.0, resized from the original.