Meryl Streep (born Mary Louise Streep; June 22, 1949) is an American actress of theatre, film and television. She is widely regarded as the greatest living actress, as well as one of the greatest actresses of all time.Streep made her professional stage debut in The Playboy of Seville (1971), before her screen debut in the television movie The Deadliest Season (1977). In 2003, the government of France made her a Commander of the Order of Arts and Letters. 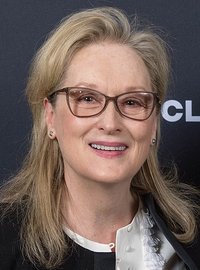 image credit
Meryl Streep by Montclair Film, is licensed under cc-by-2.0, resized from the original.