Melissa Suzanne George (born 6 August 1976) is an Australian-born film and television actress who has worked in Australia, the United Kingdom and the United States. George is perhaps best known in Australia for her role as Angel Parrish on the Australian soap opera Home and Away (1993–1996). After moving to America, she appeared in television series such as Friends (2003), Alias (2003–2004), In Treatment (2008), Grey's Anatomy (2008–2009) and Lie to Me (2010), earning a nomination for a Golden Globe Award for Best Supporting Actress – Series, Miniseries or Television Film for In Treatment. Her most recent credits include the thriller A Lonely Place to Die (2011), the Australian drama series The Slap (2011), for which she won a Logie Award for Most Outstanding Actress, and the British-American spy drama series Hunted (2012). 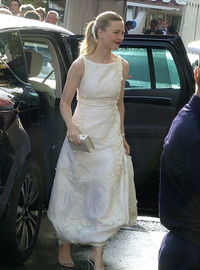 image credit
Melissa George by GabboT, is licensed under cc-by-sa-2.0, resized from the original.