Melissa Fumero (née Gallo; born August 19, 1982) is an American actress. From the age of ten, she aspired to become an actress and attended New York University, from which she received a Bachelor of Fine Arts degree in Drama. She made her professional debut in 2004, recurring as Adriana Cramer in the soap opera One Life to Live. Following several minor roles, Fumero had her first main role in the Fox (later NBC) comedy series Brooklyn Nine-Nine as Amy Santiago, a role she played from 2013 to 2021. Since this breakthrough, Fumero has voiced Melissa Tarleton in the critically acclaimed animated series M.O.D.O.K. (2021) and is set to star in Netflix's upcoming series Blockbuster. She is married to actor and former model David Fumero, with whom she has two sons. 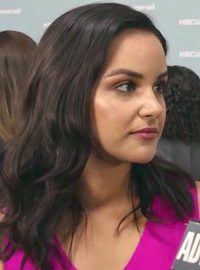 image credit
Melissa Fumero by Adweek, is licensed under cc-by-3.0, resized from the original.