Margaret Mary Emily Anne Hyra (born November 19, 1961), known professionally as Meg Ryan, is an American actress and producer. After playing several minor roles in film and television, Ryan got the leading female role in When Harry Met Sally.... Over the next 15 years, she played leading roles in several romantic-comedy films, including Sleepless in Seattle (1993), French Kiss (1995), Addicted to Love (1997), City of Angels (1998), You've Got Mail (1998), and Kate & Leopold (2001), films which together grossed a total of more than $870 million worldwide. In 1995, Time critic Richard Corliss called her "the current soul of romantic comedy." 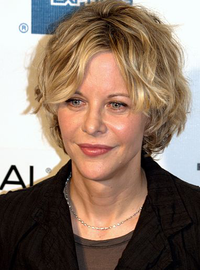 image credit
Meg Ryan by David Shankbone, is licensed under cc-by-3.0, resized from the original.