Matthew Gregory Kuchar (born June 21, 1978) is an American professional golfer who plays on the PGA Tour and formerly the Nationwide Tour. He has won seven times on the PGA Tour, with these wins spanning over 12 years. He briefly enjoyed success in the early 2000s before suffering a slump where he struggled to maintain his playing status on the PGA Tour. He rejuvenated himself and built a new, one-plane swing from 2008 onward leading to improved results. He is renowned as one of the most consistent players on the tour, having earned close to $15 million in prize money and recorded 30 top-10 finishes between 2009-2012. This included finishing as the PGA Tour's leading money winner in 2010.Kuchar won The Players Championship in 2012, the flagship event of the PGA Tour, his biggest tournament victory to date. As a result, he moved to a career high number five in the world rankings and has spent over 40 weeks ranked inside its top-10. In February 2013, Kuchar won his first World Golf Championship event, defeating Hunter Mahan in the final of the WGC-Accenture Match Play Championship. 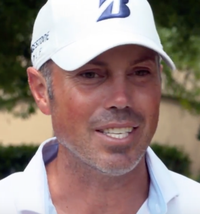 image credit
Matt Kuchar by AJGA, is licensed under cc-by-sa-4.0, resized from the original.