Martina Mariea Schiff (born July 29, 1966), known professionally as Martina McBride, is an American country music singer and songwriter. McBride has been called the "Celine Dion of Country Music" for her big-voiced ballads and soprano range.McBride was signed to RCA Nashville in 1991, and made her debut the following year as a neo-traditionalist country singer with the single, "The Time Has Come. In addition, McBride has won the Country Music Association's "Female Vocalist of the Year" award four times (tied with Reba McEntire and Miranda Lambert for the most wins) and the Academy of Country Music's "Top Female Vocalist" award three times. 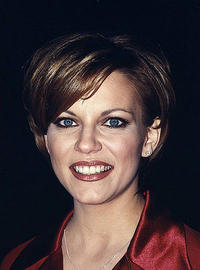 image credit
Martina McBride by John Mathew Smith &, is licensed under cc-by-sa-2.0, resized from the original.