Martin Hayter Short, CM (born March 26, 1950) is a Canadian American actor, comedian, writer, singer, voice actor and producer. He is best known for his comedy work, particularly on the TV programs SCTV and Saturday Night Live. He starred in such comedic films as Three Amigos (1986), Innerspace (1987), Father of the Bride (1991), Pure Luck (1991), Father of the Bride Part II (1995), Mars Attacks! (1996), and Jungle 2 Jungle (1997) and created the characters of Jiminy Glick and Ed Grimley. He also has appeared on stage, and won the Tony Award for the 1999 Broadway revival of Little Me. 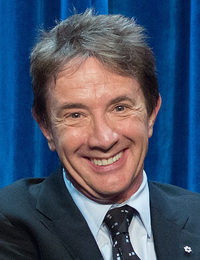 image credit
Martin Short by Dominick D, is licensed under cc-by-sa-2.0, resized from the original.