Martin Charles Scorsese (/skɔrˈsɛzi/; born November 17, 1942) is an American film director, screenwriter, producer, actor, and film historian. He is widely regarded as one of the most significant and influential filmmakers in cinema history. He was part of the New Hollywood wave of filmmaking. Since Gangs of New York (2002), Scorsese has also been noted for his collaborations with Leonardo DiCaprio. 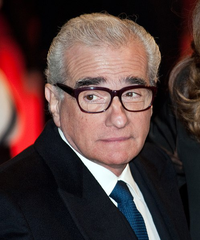 image credit
Martin Scorsese by Siebbi, is licensed under cc-by-3.0, resized from the original.