Mark Z. Danielewski (/ˈdænjəlɛfski/; born March 5, 1966 in New York City) is an American fiction author. Though his second novel, Only Revolutions (2006), was nominated for the National Book Award, Danielewski is most widely known for his debut novel House of Leaves (2000), which garnered a considerable cult following and won the New York Public Library's Young Lions Fiction Award. He has published one novella, The Fifty Year Sword, which until rereleased by Pantheon in the United States in 2012, remained relatively obscure due to only 2000 copies being published in the Netherlands (2005, De Bezige Bij). Although several shorter works have been published, notably "All the Lights of Midnight: Salbatore Nufro Orejón, 'The Physics of Ero^r' and Livia Bassil's 'Psychology of Physics'," "Parable no9: 'The Hopeless Animal and the End of Nature,'" "Clip 4," and "Parable no8: 'Z is for Zoo,'" they've almost all been completely ignored by critics (though not fans). His latest project is The Familiar, an ambitious 27-volume serial novel whose first installment, The Familiar, Volume 1: One Rainy Day in May, was released on May 12, 2015. The Familiar, Volume 2: Into the Forest was released on October 27, 2015. The Familiar, Volume 3: Honeysuckle and Pain was released June 14, 2016. Danielewski's work is characterized by an intricate, multi-layered typographical variation, or page layout. Sometimes known as visual writing, the typographical variation corresponds directly, at any given narratological point in time, to the physical space of the events in the fictional world as well as the physical space of the page and the reader. Early on, critics characterized his writing as being ergodic literature, but recently, Danielewski, who has commented on his disappointment with criticism's inability to properly confront his work, has more poignantly phrased for readers the concept behind his certain brand of writing:"Signiconic = sign + icon. Rather than engage those textual faculties of the mind remediating the pictorial or those visual faculties remediating language, the signiconic simultaneously engages both in order to lessen the significance of both and therefore achieve a third perception no longer dependent on sign and image for remediating a world in which the mind plays no part."Since the release of The Familiar, Volume 1, Danielewski has been doing small tours for the release of each volume and releasing merchandise related to House of Leaves and The Familiar on his website. He has also not been seen publicly without donning a cat shirt since at least 2010. The Familiar, Volume 4: Hades is set to be released February 7, 2017. 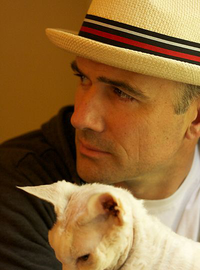 image credit
Mark Z. Danielewski by Photo taken by Emman, is licensed under cc-by-3.0, resized from the original.