Mark Richard Hamill (born September 25, 1951) is an American actor, voice actor, producer, director, and writer. He is best known for his starring role as Luke Skywalker in the original Star Wars trilogy, and his voice role as the Joker in Batman: The Animated Series, its spin-offs, and the acclaimed video games Batman: Arkham Asylum and Batman: Arkham City. Hamill has also lent his voice to various other villains and anti-heroes in various other animated productions. 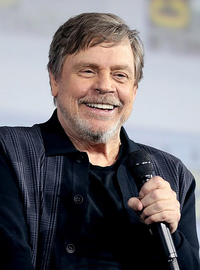 image credit
Mark Hamill by Gage Skidmore, is licensed under cc-by-sa-3.0, resized from the original.