Marié Christina Digby (/mɑriˈeɪ ˈdɪɡbi/ mar-ee-AY DIG-bee; born April 16, 1983) is an American singer, songwriter, guitarist, pianist and actress. She is known for her acoustic cover version of Rihanna's "Umbrella", which attracted attention on YouTube in 2007. The song was subsequently played on the radio station STAR 98.7, was featured on the highly rated third season opening episode of the MTV show The Hills, and peaked at #10 on the Bubbling Under Hot 100 Singles chart. Digby performed the song on the late night talk show Last Call with Carson Daly on August 2, 2007. Since then, Digby has released several studio albums, including one Japanese cover album. Her fifth and latest studio album Winter Fields was released on 29 Oct 2013.Digby has released a 17-episode web mini-series called Breathing Underwater, the same name as her 3rd album. 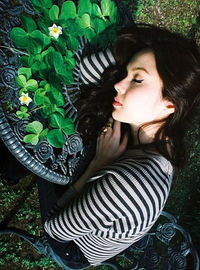 image credit
Mari Digby by Naomi Digby, is licensed under cc-by-sa-3.0, resized from the original.