Mariah Carey is an American singer, songwriter, record producer, and occasional actress. Born and raised on Long Island, New York, Carey came to prominence after releasing her self-titled debut studio album Mariah Carey in 1990; it went multiplatinum and spawned four consecutive number one singles on the U.S. Billboard Hot 100 chart. Aside from her commercial accomplishments, Carey has won five Grammy Awards, 19 World Music Awards, 11 American Music Awards, and 31 Billboard Music Awards. Referred to as the "songbird supreme" by the Guinness World Records, she is famed for her five-octave vocal range, power, melismatic style and signature use of the whistle register. 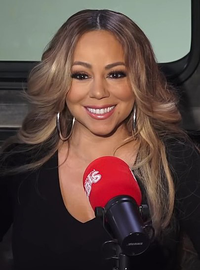 image credit
Mariah Carey by WBLS, is licensed under cc-by-3.0, resized from the original.