Dame Margaret Natalie "Maggie" Smith, DBE (born 28 December 1934) is an English actress. She made her stage debut in 1952 and has had an extensive, varied career in stage, film and television spanning over sixty years. Smith has appeared in over 50 films and is one of Britain's most recognisable actresses. In September 2012, she was awarded the Stratford Shakespeare Festival's Legacy Award, which she accepted from Christopher Plummer, who presented it to her in a ceremony at the Fairmont Royal York Hotel. 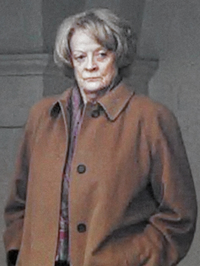 image credit
Maggie Smith by Kebl0597, is licensed under cc-by-sa-2.5, resized from the original.