Mae Margaret Whitman (born June 9, 1988) is an American actress. She is known for her roles as blind girl Amy trapped with an escaped convict in "Enemy Within (2007)", Ann Veal in the TV series Arrested Development, Amber Holt on the TV series Parenthood, and Roxy Richter in Scott Pilgrim vs. the World. She is also known for her voice work as Katara in the animated television series Avatar: The Last Airbender, Little Suzy in Johnny Bravo, Rose/Huntsgirl in American Dragon: Jake Long, April O'Neil in the 2012 iteration of Teenage Mutant Ninja Turtles and Tinker Bell in the Tinker Bell movies. Her first major studio role was as the President's daughter in the 1996 film Independence Day. She was also in the 2012 film The Perks of Being a Wallflower as Mary-Elizabeth. 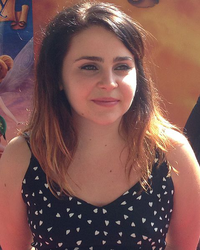 image credit
Mae Whitman by Mingle Media TV, is licensed under cc-by-sa-2.0, resized from the original.