Mary Jane "Mae" West (August 17, 1893 – November 22, 1980) was an American actress, singer, playwright, screenwriter and sex symbol whose entertainment career spanned seven decades.Known for her bawdy double entendres, West made a name for herself in vaudeville and on the stage in New York before moving to Hollywood to become a comedienne, actress and writer in the motion picture industry. In consideration of her contributions to American cinema, the American Film Institute named West 15th among the greatest female stars of all time. 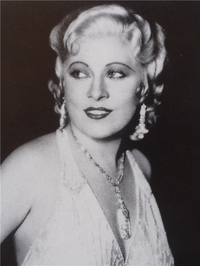