Madhuri Dixit (born 15 May 1967) is an Indian film actress who is known for her work in Hindi cinema. Often cited as one of the best actresses in Bollywood, Dixit made her film debut in Abodh (1984) and received wider public recognition with Tezaab (1988). She went on to establish herself as one of Hindi cinema's leading actresses, acknowledged for several of her performances, her beauty, and her accomplished dancing. In 2008, she was awarded the Padma Shri, India's fourth-highest civilian award by the Government of India. 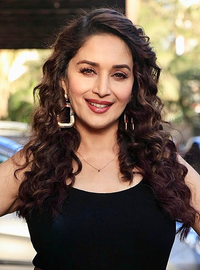 image credit
Madhuri Dixit by Bollywood Hungama, is licensed under cc-by-3.0, resized from the original.