Madhubala (14 February 1933 – 23 February 1969), was an Indian Bollywood actress who appeared in classic films of Hindi Cinema. She was active between 1942 and 1960. Along with her contemporaries Nargis and Meena Kumari, she is regarded as one of the most influential personalities of Hindi movies.Madhubala received wide recognition for her performances in films like Mahal (1949), Amar (1954), Mr. & Mrs. '55 (1955), Chalti Ka Naam Gaadi (1958), Mughal-e-Azam (1960) and Barsaat Ki Raat (1960). Madhubala's performance in Mughal-e-Azam established her as an iconic actress of Hindi Cinema. Her last film, Jwala, although shot in the 1950s, was released in 1971. Madhubala died on 23 February 1969 after a prolonged illness. 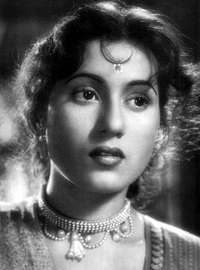