Macaulay Carson Culkin (born August 26, 1980) is an American actor. He became famous for his role as Kevin McCallister in Home Alone and Home Alone 2: Lost in New York. He is also known for his roles in Richie Rich, Uncle Buck, My Girl, The Pagemaster, Party Monster, and the music video for Michael Jackson's "Black or White". At the height of his fame, he was regarded as the most successful child actor since Shirley Temple. Culkin ranked at number two on VH1's list of the "100 Greatest Kid-Stars" and E!'s list of the "50 Greatest Child Stars". 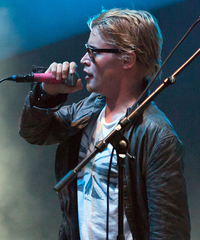 image credit
Macaulay Culkin by Matt Biddulph, is licensed under cc-by-sa-2.0, resized from the original.