Manoj Shyamalan (/ˈʃjɑːmələn/; born 6 August 1970), known professionally as M. Night Shyamalan, is an Indian-American screenwriter, film director, and producer known for making movies with contemporary supernatural plots including The Sixth Sense (1999), Unbreakable (2000), Signs (2002), The Village (2004) and The Happening (2008). He is also known for filming and setting his movies in and around Philadelphia, Pennsylvania, where he was raised.Most of Shyamalan's commercially successful films were co-produced and released by the Walt Disney Studios' Touchstone and Hollywood film imprints.In 2008, Shyamalan was awarded the Padma Shri by the government of India. 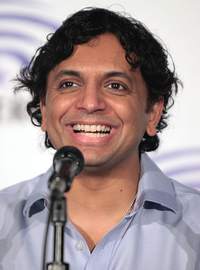 image credit
M. Night Shyamalan by Gage Skidmore, is licensed under cc-by-sa-3.0, resized from the original.