Lynn Whitfield (née Butler-Smith; born May 6, 1953) is an American actress and producer. She began her acting career in television and theatre, before progressing to supporting roles in film. She won a Primetime Emmy Award for Outstanding Lead Actress in a Miniseries or a Movie and received Golden Globe Award nomination for her performance as Josephine Baker in the HBO biographical drama film The Josephine Baker Story (1991). Whitfield spent her career after breakthrough performance as Josephine Baker playing the leading roles in a number of made for television movies in 1990s, and had several starring roles in films, include performances in A Thin Line Between Love and Hate (1996), Gone Fishin' (1997), Eve's Bayou (1997), Stepmom (1998), Head of State (2003), Madea's Family Reunion (2006) and The Women (2008). Whitfield also starred in a number of smaller movies in 2000s and 2010s. In 2016, she began starring as villainous Lady Mae Greenleaf in the Oprah Winfrey Network drama series, Greenleaf. Whitfield has won five NAACP Image Awards. 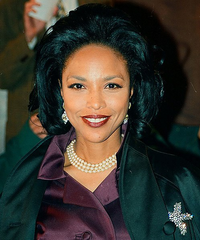 image credit
Lynn Whitfield by John Mathew Smith &, is licensed under cc-by-sa-2.0, resized from the original.