Wasalu Muhammad Jaco (born February 16, 1982), better known by his stage name Lupe Fiasco (/ˈluːpeɪ/ LOO-pay), is an American rapper, record producer, and entrepreneur. He rose to fame in 2006 following the success of his debut album, Lupe Fiasco's Food & Liquor. He also performs as the frontman of rock band Japanese Cartoon under his real name. Fiasco is also noted for his anti-establishment views, which he has expressed in both interviews and his music. 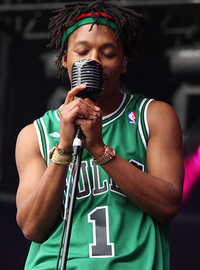 image credit
Lupe Fiasco by Eva Rinaldi, is licensed under cc-by-sa-2.0, resized from the original.