Andrew "Drew" Hankinson (born December 22, 1983) is an American professional wrestler, currently signed with WWE on the Raw brand under the ring name Luke Gallows. Under his first stint with the promotion, he also appeared under the ring name Festus. He is perhaps best known for working for New Japan Pro Wrestling under the ring name Doc Gallows, and he also wrestled prominently under the TNA banner, where he was a member of the heel Aces & Eights stable under the ring name D.O.C. (Director of Chaos). Hankinson was also known for his appearances as an impostor of the wrestler Kane, and as the tag team partner of Jesse while they were part of the tag team Jesse and Festus on the SmackDown brand. After a few months, he reappeared as the enforcer and "disciple" of CM Punk, sporting a cleaner, militant look, with the Festus character's "real identity" revealed as Luke Gallows. 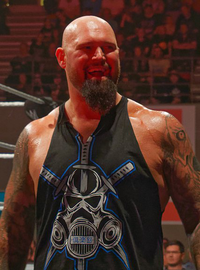 image credit
Luke Gallows by Miguel Discart, is licensed under cc-by-sa-2.0, resized from the original.