Christopher Brian Bridges (born September 11, 1977), better known by his stage name Ludacris, is an American rapper, entrepreneur and actor. Along with his manager, Chaka Zulu, Ludacris is the co-founder of Disturbing tha Peace, an imprint distributed by Def Jam Recordings. Ludacris has won a Screen Actors Guild, Critic's Choice, MTV, and three Grammy Awards during his career. As an actor, he has appeared in films including 2 Fast 2 Furious (2003), Crash (2004), Gamer (2009), Fast Five (2011), New Year's Eve (2011), and Fast & Furious 6 (2013). 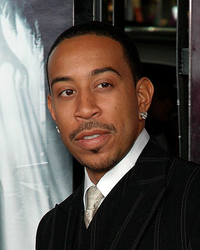 image credit
Ludacris by Glenn Francis, is licensed under cc-by-sa-3.0, resized from the original.