Lori Singer (born November 6, 1957[2]) is an American actress and cellist. She is perhaps best known for her role as Ariel Moore, the female lead in the 1984 feature film Footloose, and as Julie Miller in the television series Fame. Early life and musical career[edit source]Singer was born in Corpus Christi, Texas. [10]On May 4, 2011, Singer returned to television with a guest starring role on Law & Order: Special Victims Unit. 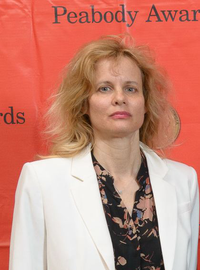 image credit
Lori Singer by Peabody Awards, is licensed under cc-by-2.0, resized from the original.