Logan Wade Lerman (born January 19, 1992) is an American actor, known for playing the title role in the fantasy-adventure Percy Jackson films. He appeared in commercials in the mid-1990s, before starring in the series Jack & Bobby (2004–2005) and the movies The Butterfly Effect (2004) and Hoot (2006). Lerman gained further recognition for his roles in the western 3:10 to Yuma, the thriller The Number 23, the comedy Meet Bill, and 2009's Gamer and My One and Only. He played d'Artagnan in 2011's The Three Musketeers, starred in the teen drama The Perks of Being a Wallflower (2012), and has supporting roles in the 2014 films Noah and Fury. 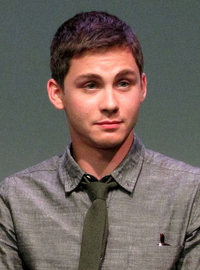 image credit
Logan Lerman by AlyssaK98, is licensed under cc-by-sa-3.0, resized from the original.