Lindsey Adams Buckingham (born October 3, 1949) is an American musician, singer and songwriter, best known as guitarist and male vocalist of the musical group Fleetwood Mac from 1975 to 1987, and 1997 to present day. Aside from his tenure with Fleetwood Mac, Buckingham has also released six solo albums and three live albums. As a bandmate of Fleetwood Mac, he was inducted into the Rock and Roll Hall of Fame in 1998. In 2011, Buckingham was ranked 100th in Rolling Stone magazine's 2011 list of "The 100 Greatest Guitarists of All Time". In Fleetwood Mac's heyday, Buckingham was known for his fingerpicking guitar style and wide vocal range as well as the sometimes tense chemistry between himself and former girlfriend and member Stevie Nicks. 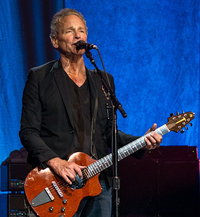 image credit
Lindsey Buckingham by Raph_PH, is licensed under cc-by-2.0, resized from the original.